And so we leave 2020 behind us, all things considered I can say good riddance!

I've been looking back at 2019s update, and realised how my engagement has really dropped off this year. Of all the years where I can dedicate a lot of time to trading in EVE it was this one, but I've just felt very little motivation to log in for a while now. A lot of that is that I've got back into WoW (particularly playing TBC private servers as that was when I first played and it holds a lot for nostalgia for me). Some of it is just that I've been doing the same thing for so long in EVE that it gets dull, and I think I need to vary things up a bit. I have major life changes coming up though and so my time for video games full stop will be greatly reduced, but maybe EVE would be better than WoW for that as I don't have to be fully engaged to trade and can step away from the keyboard more easily! Time will tell.

The observant among you will notice there's no start of December update. This annoys me, as it would mean 2 full years of blogging every months I march (well, amble) towards the Trillion. But the simple fact is I didn't log in around then.

Anyway, my end of year position:

I have a total of 782.2Bn ISK. This is an increase on the start of November of 15.6Bn ISK. That's probably the worst couple of months of the year, which makes sense as I've simply not logged in. Also indicative that I have 339.7Bn ISK just sat in wallets! That's frankly criminal.

Lets have a look at this time last year:

This time last year I had 566.5Bn, so this year I have earned 216.6Bn. that's compared to 296.1Bn for 2019. That's a decrease of 27% in terms of profit. I predicted that by this time I'd have 900Bn, so I've fallen well short. Disappointing, but you could argue for the amount I actually played the game it's still pretty good. I think I'll become a trillionaire in 2021 still, but it'll be a lot more work to get there than I thought. Here's hoping I find some motivation next year!

CCP has created another set of "your year in EVE" videos, which you can customise this year. Here is mine for Lornor:

It's a bit disappointing as it only looks at 1 character, and I use 11 for trading but gives a reasonable snapshot. Interesting to note that over 1 trillion has passed through just Lornor's wallet, and he's not my Jita buyer! 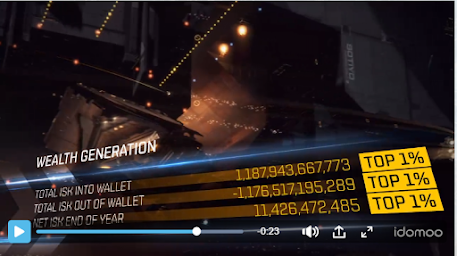 Though having said that, the market buys and sells is a much lower ~480 Bn. The difference is probably accounting for this character being a buyer for my Amarr seller, and there being plenty of moving ISK around to and from the corp wallet. 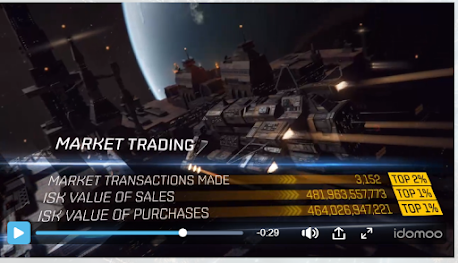 I would compare with my EVE-Mogul stats, but the overall stats graphs appear to be a bit screwed up on there, and have been for a little while.
I'm not going to make any grand promises about 2021, other than that I will get to the Trillion. I'll update as things improve.

I have 4 accounts, with 11 characters dedicated to trading:

I've expanded the items sold on this character, though there's still a lot to do. I need to buy this character a Crane so he can do his own hauling (1 jump). Currently has 11Bn in sell orders.

My main money maker, with ~81 Billion in active sell orders at the time of writing. Takes implants and faction/deadspace modules delivered by my Rens character and sells them in Amarr.

Very similar to the Amarr seller, he sits in Dodixie, takes receipt of items, then set up sell orders. Currently has 52 Billion in sell orders. No news with this character.

Like the other characters, this character takes items bought in Jita and sells them in Rens. Currently has 82 Billion ISK in active sells. He also hauls my goods from Jita to the other trade hubs in a Crane.

Like the other high sec seller characters, he sits in a trade hub in Hek and sells items brought to him by the Rens seller. Currently on 17Bn in sell orders. Needs to pay for his own PLEX every month, which isn't too difficult.

Sits in a player owned Fortizar in Ashab, buys from buy orders and sells through sell orders with a range of 1 Jump to cover Amarr. This character trades completely different items to the rest of my characters. I gave this character 1 Billion to start with, and he's currently on 22.4 Billion.

My more serious station trader. I have a character in Perimeter in a player owned Keepstar, with 1% broker fee that sits in one station, buys from buy orders and sells through sell orders with a reach of 1 jump.

Most of my items are bought and sold in the Jita 4-4 station. This character trades completely different items to the rest of my characters. I gave this character 10 Billion to start with, and he's currently on 78.5 Billion. I spent the time to get faction and corp standing up with this character, and this is my attempt to take station trading seriously. He also farms SP and sells injectors on the market.

Station trading in the Horde Keepstar in R10-GN. I set him up with 1Bn and he's currently at 13.8Bn.

As stated, I've moved this character to just being a seller. Currently 106Bn in sell orders.

Nothing has happened on this character recently.