Adjustment, a mistake, and big write-downs

So, I've basically not logged in this month until yesterday. I'm not really sure why, partly been busy with work and gardening/doing things around the house. Partly I've been playing some Classic WoW for a bit of variation, partly I've just not had the same motivation to log in.

All that meant that when I did log in I was greeted with this on my skill point seller: 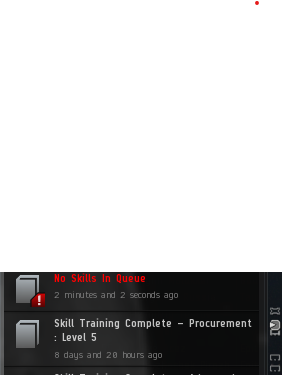 Oh dear. Over a week of no skill training at all! On a character with +5 implants! I promptly extracted 4 extractors worth of skills and sold them on the market, and set up my queue again. Skill points aren't worth what they once were, with the price of PLEX dropping but this is only meant to cover the PLEX cost of my 4th account, so the exact ISK amount doesn't really matter.

Skill points is a nice segue into my other mistake, one that's lead to a huge write down in my valuation. On the same character, I used to trade Large Skill Injectors prior to the broker relations change. I would buy from 1 jump buy orders in Perimeter, and sell them either in Jita or Amarr, Amarr being the higher margin but slower moving market. This worked well, until the changes came in, and the value of PLEX, and therefore Skill Injectors, dropped continuously. I had a sell order up for 30 skill injectors for 1079 mil each in Amarr at the time. As they never sold, I left them hoping the price would rebound and I'd get the sell eventually. This hasn't happened, and when I logged in yesterday I found myself with a lot less in sell orders and 30 injectors sat there. Oh dear.

I decided to bite the bullet and take the hit. It'll leave me with a more realistic valuation anyway.

So that's a write down in value of 9Bn ISK. Ouch.

Painful, but it's a more accurate reflection of my actual net worth. Overnight 19 of them sold, so I might have to adjust to get rid of the additional 11, and then work out how to re-use that capital. Speaking of capital, I have over 100Bn sitting in wallets. This is a first, but also a bad thing, that 100Bn is earning me nothing! need to up my game significantly. I also carried my highest value blockade runner cargo yet today, at 84Bn! Can't imagine how deflating it'd be to get ganked carrying all that.

I've done my normal trade run and after all of this I'm 5Bn up on the start of the month. If you add on the write down it would be 14Bn. I'd expect to be 22Bn up at this point, so you can really see the hit from not logging in. Going to be a poor month but I won't let it happen again!
Posted by Lornor at 02:27